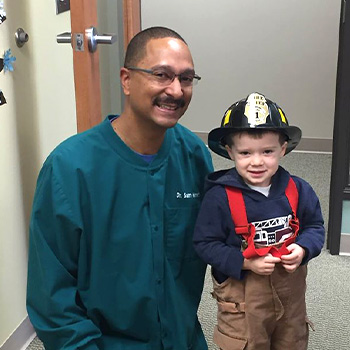 In addition to being a husband and father of two, Dr. Sam Malcheff is also a U of M clinical lecturer, University of Michigan and Howard University graduate, Michigan native, and retired Detroit firefighter.

A second-generation dentist, Dr. Sam grew up in Rochester Hills and graduated from the University of Detroit Jesuit High School. He completed his undergrad studies at Howard University in 1994. While taking post-baccalaureate science classes at Wayne State University, Dr. Sam worked as a Detroit firefighter. Thereafter, he was admitted to the University of Michigan School of Dentistry, and graduated in 2003.

It was during his service at the Detroit Community Health Connection as a National Health Service Scholar, that he realized his inclination toward working with children. He realized he could have a positive impact on how they viewed visiting the dentist.

After two years, he returned to the University of Michigan and received his Master of Science in pediatric dentistry in 2007. Dr. Sam enjoyed his time as an associate in private practice in Ann Arbor. He is now excited to call family-friendly Canton Township home.

In his spare time, Dr. Malcheff likes to read science fiction (ask him about The Hunger Games or Harry Potter), go to the cinema (Michigan Theatre is one of his favorites), serve as swim and soccer “cabbie” to his children, travel, and ski.